Chief Khalsa Diwan is a premier Sikh educational and socio-religious institution which is held in high esteem all over the world for its humanitarian and dedicated service.

The establishment of Chief Khalsa Diwan on 30 October 1902 bears testimony to the dreams of some committed stalwarts of the Guru Khalsa Panth. Opening session of the new organization designated as Chief Khalsa Diwan was held in the Malwai Bunga, Sri Darbar Sahib Amritsar on 30 October 1902. The inaugural Ardaas was performed by S. Teja Singh of Bhasur. Bhai Arjan Singh Bagrian was elected as President, S. Sunder Singh Majithia Secretary and S. Sujan Singh Sodhi Addl. Secretary. In addition to these office bearers, 18 other members were inducted in the executive committee. On 9 July 1904 Chief Khalsa Diwan was registered under Act XXI, 1860. The success of more than a century old Chief Khalsa Diwan lies in the tireless efforts of its dedicated team of committed workers bent upon widening in horizons of the community and its energetic president, who is a symbol of truly dynamic, and vibrant leadership. 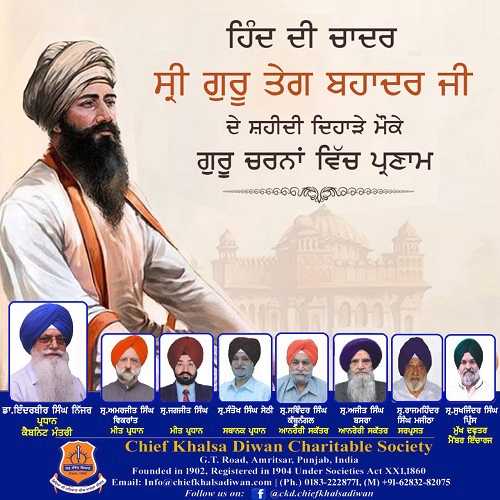